REVIEW: ‘Security Breach’ presents a shift in the FNAF universe 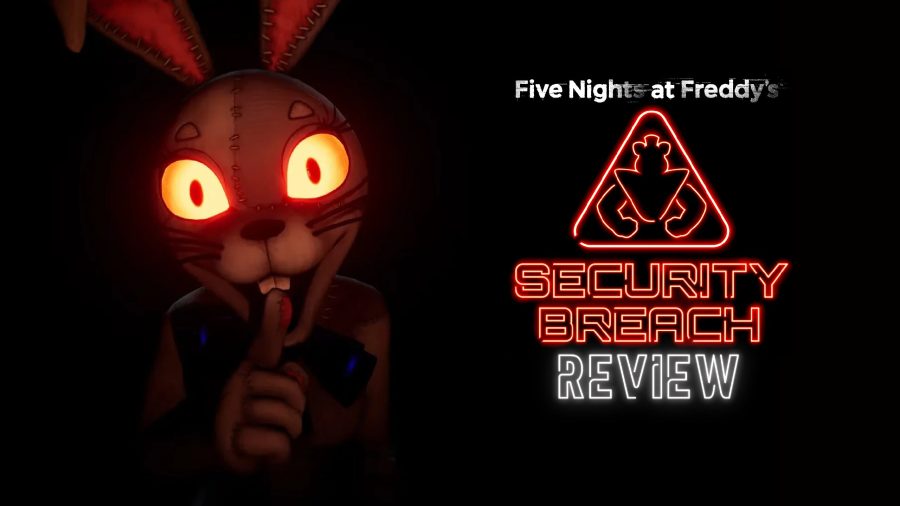 The “Five Nights at Freddy’s” franchise took a turn with its most recent installment, “Security Breach,” and honestly, I have mixed feelings about it.

The best way to describe it is “different.” The games in the past have had an indie feel, stemming from the fact that they really were, at first. However, they have quickly become something much bigger, and the games themselves represent that. We’ve gone from a tiny security office to a bedroom, to now, a “Mega Pizzaplex.” So, that’s my first note for the game. If you loved the indie feel of the past games, this one may not suit your fancy. Whether it’s because it was just the next step in the timeline, or a shift because of Scott Cawthon’s absence, the change in feel is undeniable.

That said, the Pizzaplex does offer an open world for the first time in the franchise. You have a near-endless map with more and more rooms to be found around every corner. It combines past elements like flashlights and closing doors and saving batteries — all with the twist of running around while doing it. For a first-time FNAF player, this might seem overwhelming, but for the seasoned player, it may be just the twist they needed. I’ll be the first to express my enjoyment of the map, with general areas and then areas associated with each character, such as Gator Golf or Roxy’s Racetrack. And don’t even get me started on the daycare portion, which was genius. Personally, I think this open world is just the thing they needed to keep players interested. You can’t make people hold doors closed forever.

Now, I can’t speak on this game without mentioning the, um, extra personality. In other words, the game wasn’t really ready to be released. There are plenty of glitches, from animatronics getting stuck, to the game just glitching out of a quest. In my own playthrough experience, I had to completely restart to just get the prompt to get into Freddy for the first time. Had there been a couple more months for development, some of these issues could have been patched first.

That leads me to my next point. To a FNAF fan that has not yet played this game, they might be completely taken aback at the idea of “getting into Freddy.” And it’s true, up until this point, Freddy has been completely evil, even one of the suspects for chewing off a kid’s frontal lobe in 1987. But in this game, he’s helping the main character – a child named Gregory – escape the Pizzaplex by carrying him inside his stomach area. The roles are completely switched, down to the security guard being an antagonist. To this, I would say the same as I did about the open world. You can’t have six main games – with other VR installments and such – without needing to switch things up to keep your audience interested.

Of course, I won’t finish the review without a brief description of the “scare factor.” Now, I believe this comes from mainly two factors: the character design and the gameplay. So coming from someone who considers FNAF 4 the scariest game, this one ranks low.

Let me explain myself. Before the game was released, I thought that the open world map would make the game scarier, as you actively have animatronics chasing after you, instead of just knocking on your door. But, in reality, this is exactly what made it less intimidating. There was something terrifying in the earlier games about knowing the animatronic was coming, but not being able to do anything. You were completely stationary, just waiting for them to strike. But in this game, the ability to actually escape them and hide makes it lack that suspense that’s so scary. Further, the character designs are extremely childish and colorful, which doesn’t do much for the scare factor either. It makes sense for the context of the game, but the torn apart and beaten down animatronics are so much more terrifying. This said, of course the game is still scary with its jumpscares, but it lacks the level that past ones had.

All in all, “Security Breach” introduced some welcome changes to the FNAF universe, such as the open world map and change in lore. It does a great job at tying traditional gameplay into a completely new setup. On the other hand, it definitely would have benefitted from some extra months in development, and in my own personal opinion, it lacks the scare factor past games have had. This said, the glitches aren’t anything a patch can’t fix, and with all the great gameplay it welcomes, I would say that it deserves a download. All of the small aspects that were worked on to make it come together are incredible, and it presents such a deeply-rooted backstory for players who may or may not be experienced with the franchise, which is something rare for a horror game.