MHS Volleyball teams each wrap up a great season 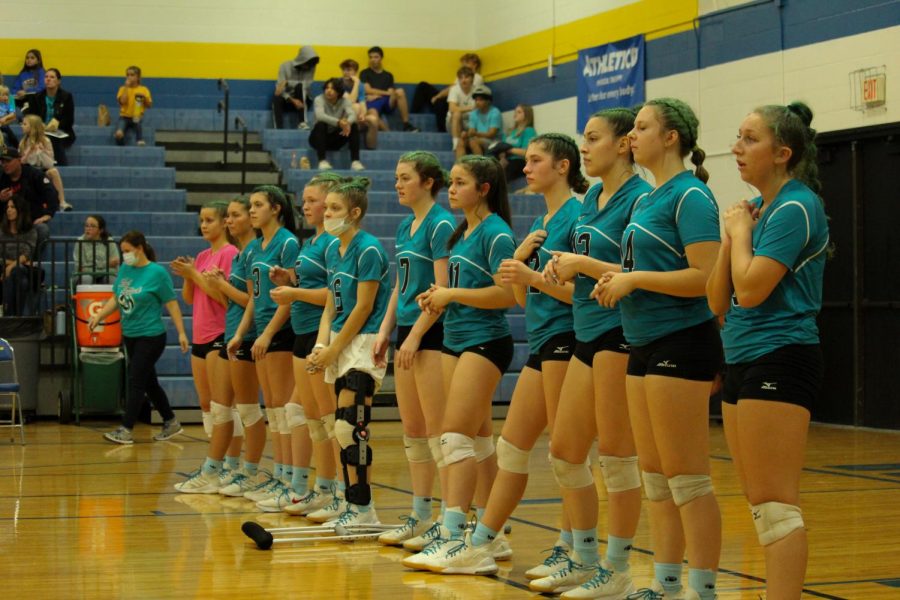 The MHS Varsity Volleyball team lines up before their "Teal Attack" match. The final score of the game was 3-1, with Monroe losing 3 of the sets.

This year, our Monroe High School volleyball teams played their hearts out. The freshman team, junior varsity team, and varsity team of girls all played with pride, and joy.

The freshman team ended their season with 15 wins, and 0 losses. They had 4 home games and 11 away games. This did not matter, as they still dominated. Their hardest game in their season was against Ida with a final score of 2-1.

One player, Rowan Westerlund, expressed her joy towards the game.

“I made friends, had lots of laughs, and had so much fun!” shared Westerlund.

Congratulations to the freshmen girls for going undefeated all season!

For the junior varsity team, the girls finished with 5 wins, 8 losses, and 4 tied games. They had 12 away games, and 5 home games. Bedford and Saline were their toughest games, according to the girls.

Throughout the season, the JV team grew stronger as a team, and made significant progress after each game, as shared by one player, Ally Younglove.

“I definitely enjoyed making friends and getting closer to my teammates,” stated Younglove.

Finally, our varsity team. They ended the season with 3 wins, and 8 losses. Bedford had given them the toughest competition.

One player, Gabriella Anderson, reflected well on the season as a whole.

“Looking at our record, it was not all wins, but as a team we did really well and worked together. I had the most fun I ever had this year,” said Anderson. “The effort we put in cannot be measured.”

There is a trend with each team. No matter what their record is, they still put a lot of effort in and enjoyed their time on the court. This year, our volleyball teams showed what playing with Trojan Pride looks like by playing hard and developing teamwork skills. Congratulations to each team and it’s players.